Emperor Kylorin, ruler of the Patrian empire at the dawn of the Age of Magic, was given the secret of magic by the fallen Angel Ceridwen in exchange for his fealty. Originally Angel of the Stars, Ceridwen was cast from heaven by the One God to become the Angel of Magic and ruler of a domain binding the Seven Hells together. Kylorin trained 21 apprentices in the secrets of magic. Many of these turned their power to evil purposes. Ultimately Kylorin renounced Ceridwen and prayed to Nantosuelta, Goddess of Faith, for redemption. The civil war that followed fragmented the Patrian empire into many smaller kingdoms. The Age of Magic ended with the summoning of Mulcarn by the Illians, heralding the beginning of the Age of Ice.

It is said Kylorin lived for over 1,000 years. During his incredibly long life he sired many hundreds of children, all of which inherited his divine gift for magic. Those with the ‘Blood of Kylorin’ often become great Sorcerers, though some never discover or learn to control their latent power. Kylorin eventually became the greatest hero in history by wielding the Godslayer to banish Mulcarn and end the Age of Ice. The mythical archmage/prophet disappeared from creation in the cataclysm that followed. Followers of both Ceridwen and Nantosuelta claim the legendary hero for their own, but in truth no one knows where his spirit now resides.

Mana ‘nodes’ occurring naturally throughout Arcanearth are harnessed by the most powerful magicians of level 9 and higher (Adepts, Mages, Archmages) to make their specific type of magical energy available to members of their order or guild, and to cast earth-shaking strategic spells (see World Rituals, below). Guilds are typically but not always associated with one of the empires of Arcanearth (human, elven, dwarven, gnomish, humanoid, demonic, angelic or otherwise). Clerics and Druids can also cast World Rituals, but gain the required mana from their deity rather than from mana nodes.

21 types of magical energy were discovered by Kylorin’s apprentices, listed here by name. 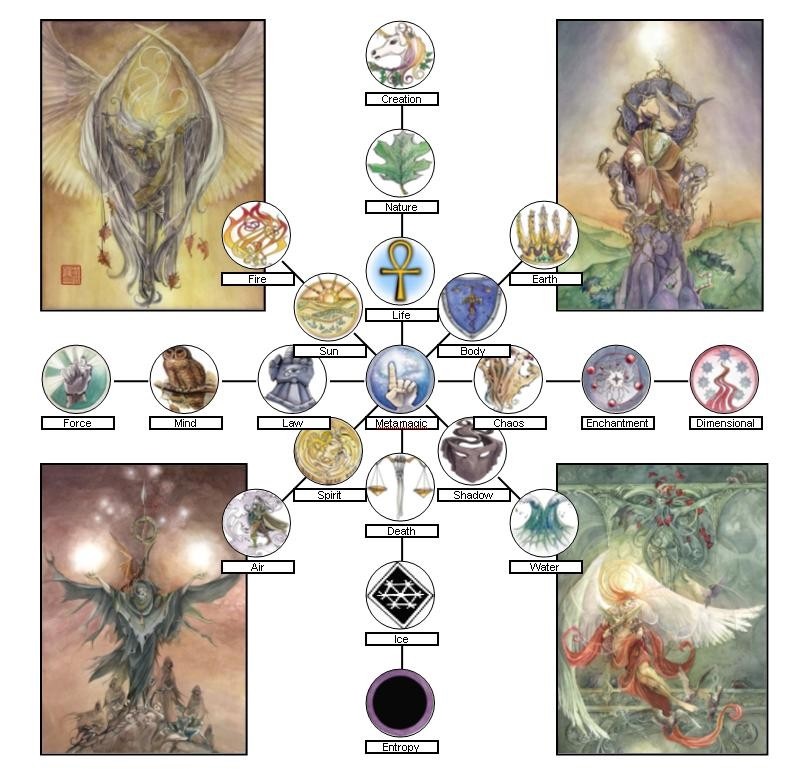 At level 9 (Arcane:Adept or Divine:High Priest ), Clerics, Druids and Magicians (Wizard/Sorcerer/Warlock) gain the ability to cast strategic spells able to affect hundreds of individuals or large areas of Arcanearth many miles across. At 13th level (Mage or Ecclesiast), the 2nd rank of world rituals become available. At 17th level (Archmage or Prophet), the 3rd and final rank is attained.

While the effects of these spells on any one individual might be minor, collectively they make the most powerful magicians, clerics or druids a force to be reckoned with during the clash of armies. World Rituals are divided into three ranks: 1st, 2nd and 3rd. World rituals are associated with a mana type and REQUIRE access to that mana type in order to be cast.

For Wizards, Warlocks and Sorcerers, each world ritual requires it’s own dedicated spell book and must be learned just as with normal spells, though the physical book is not required to cast the spell. Clerics and Druids prepare their world rituals through meditation and commune with deities. One spell from each ritual rank can be prepared at a given time. Thus, an Adept or Acolyte (level 9-12) can prepare a single 1st rank ritual, a Mage or HIgh Priest (level 13-16) one each of 1st and 2nd rank, and an Archmage or Prophet (level 17+) three total rituals spells, one from each rank.

Ritual spell ‘slots’ are recovered at the rate of 1 per ‘long rest’, +1 week of study, prayer, meditation or commune per spell rank. So recovering all three ranks requires 6 weeks and 3 days. Unlike regular spells, lower level rituals cannot be cast using higher level slots. When recovering, studying or preparing world rituals, no other spells can be known, prepared, recovered or cast: all regular spell slots must remain empty.

- Fair Winds (1st rank: Air): affect winds across a 30 mile area, sufficient to speed friendly fleets on their way or discommode enemy vessels.
- Stoneskin (2nd rank: Earth): grant a significant AC bonus to friendly armies in a 30 mile area.
- Break Weave (2nd rank: Metamagic): dispel magic in a 90 mile area and prevents manifestation of any lasting magical effect for several weeks or even months (spells with a duration other than ‘Instantaneous’). If this ritual is performed at the site of a mana node it will be cleared back to raw unimproved mana of no specific type. Naturally, those who control a mana node will try to prevent this (ie, you will face a cabal of deadly mages before getting anywhere near the mana node).
- Charm (2nd rank: Mind): ensorcell potentially thousands of vulnerable mortals across a 30 mile area, rendering them unable to attack, though they can still travel and defend. Only non-living, constructs or undead are immune to this world ritual.
- Army of Darkness III (3rd rank: Death): summon an army of powerful wraiths from the realm of death. This ritual spell is also used by evil archmages to achieve immortality as a Lich.

Mage guilds exist throughout the empires of Arcanearth. Each guild maintains a facility of some sort in a specific city, such as a guildhall, apothecary, alchemists laboratory, inn, etc. The most powerful guilds are based in the empire’s capitol, or nearby a source of mana. Guilds controlling a physical mana node always build a keep and tower atop the node. These towers can be huge and often become the primary headquarters of the guild.

Wizards tend to receive the greatest benefit from guild association, but Sorcerers and Warlocks also join. The types of arcane casters found in a guild is usually proportionate to the casters found in that region. A few small guilds are restricted to only sorcerers or only warlocks. These smaller more specialized guilds usually do not control any mana, or at least not in the form of a physical mana node.

Most guilds allow two forms of membership: ‘associate’ and ‘member’. Associates pay only a nominal fee to gain access to simple accommodations, usually in a common chamber with other junior spellcasters, a basic library, and secure storage of spellbooks, magic items, wealth, scrolls, etc. Full members pay dues averaging around 100gp per level per year.

by: Omegabase
See All Pages