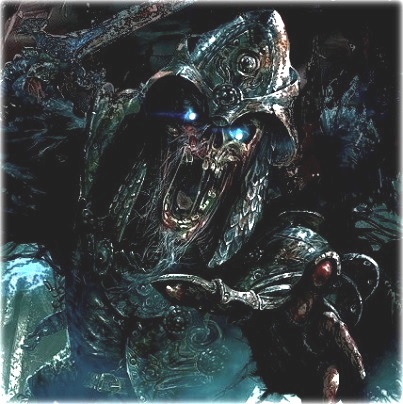 After a much-needed rest in goblin-town, the rune-heroes return to the dragon-sculpture chamber. Lodermulch climbs the nine foot high marble statue. The large rubies pried from the bronze dragon golem fit perfectly into the empty eye sockets. A puff of stale air blows dust from the secret door as it slowly swings open.

Beyond lies a wide hall flanked by alcoves where stand red-veined blue marble statues of ancient nobles in archaic dress and armor. A pair of stone kobolds kneel in supplication before each alcove. At the end of the hall is a pit and archway giving access to a mausoleum lit with flickering green. In the center stands a massive bronze-bound sarcophagus of black marble.

While Finch and Leelo watch from the door, Loder carefully inches his way around the hall. His route is marked by a trail through the dust of long centuries. Five of the alcoves are occupied by statues, each one subtly different than the next. The sculptures are stylized but clearly depict unique individuals. Bronze name-plates above each alcove bear names in Patrian.

Finch and then Mesmer enter to decypher the ancient letters: Paimon, Dylantyr, Leucetios, Kezef, Asmoday and Greysun. Mesmer realizes these are the names of famous archmages from the Age of Magic. Here stand statues of six of the 21 wizards trained by Kylorin, the father of magic and ruler of the first great empire of man. Each apprentice eventually became a powerful mage and discovered a unique source of magical mana. Many lived hundreds of years before finally succumbing to the hazards of magic or Kylorin’s great purge in the latter years of the Age.

One statue is missing: Asmoday. From this alcove a trail of tiny clawed feet meander across the dust to the edge of the pit, where they disappear. Subsequent centuries of dust cover the trail. There is no sign of anything in the deep bronze-spiked pit between the statue-hall and mausoleum.

Grenl and Erki, an odd couple if there ever was one, fetch boards from goblin-town. Mavriy crosses the pit first. As soon as the demonspawn’s armored boot touches the far side, a high tittering voice sounds from about the chamber: “You broke the binding. My watch over Asmoday is complete!”, followed by a brief flapping of leathery wings. Mavriy and Loder are close by, but still unable to pinpoint the source of the sound. Krag, Loder, Mesmer and Leelo cross the rickety footbridge. Finch was made wary of ancient tombs by his time in the catacombs beneath Cahir Abbey and maintains watch on the far side. His henchman Grenl stands close by.

Mesmer retrieves an ever-burning green torch from a bronze sconce in one corner. The other three sconces are empty. The sarcophagus is huge, almost twelve feet long including the massive dragon-head at the north end. The round-edged lid is six inches thick and fastened to the box with massive hinges of greenish bronze. Krag, a skilled blacksmith, estimates it will require ten minutes each or one hour total to cut through all six clamps.

Leelo and Lodermulch carefully inspect the room for hidden adits, traps, doors or spaces. By sheerest luck Leelo spots the faint outline of a narrow trapdoor. Loder finds the latch and lifts the heavy stone panel on hinges of bronze. Below is a secret escape-passage leading to a secret room just south of Asmoday’s empty alcove. A well concealed door opens into the back of the alcove. On the far wall of the chamber are inscribed the words: “An Archmage entombed alive for transgressing Kylorin’s Law still retains the honor of his position.”

A shout is heard from the secret door where Erki maintains watch. Finch glimpses a small winged atrocity attacking Erki. The gnome rolls and scrambles away, but is scratched the length of his face and neck by long black claws. The apparition disappears as quickly as it appeared, leaving only a tittering laugh and snap of leathery wings in it’s wake. It seems a tiny demonic guardian now stalks the party. Erki quickly cleanses the wounds with water. This and a native resistance to poison saves the gnome’s life. He hastens to join Keelo in the hall of alcoves. The druid quickly heals the ugly scratches.

Everyone takes positions as Krag and Mesmer prepare to break the last seal. The combined strength of Krag, Mavriy and Mesmer is required to get the massive lid moving. Suddenly the lid flips over and slams to the floor. The ever-burning torch dims to a feeble coal of green as a dark presence rises from the tomb. The form is indistinct save for eyes like points of glowing fire and a fantastical suit of bronze armor sculpted with stylized dragons. Mavriy recognizes the apparition described by Yusdrayl in her visions. Is this the fruition of Asmoday’s attempts to free himself from a prison established in the Age of Magic? What law of Kylorin could Asmoday have broken to deserve such a fate? 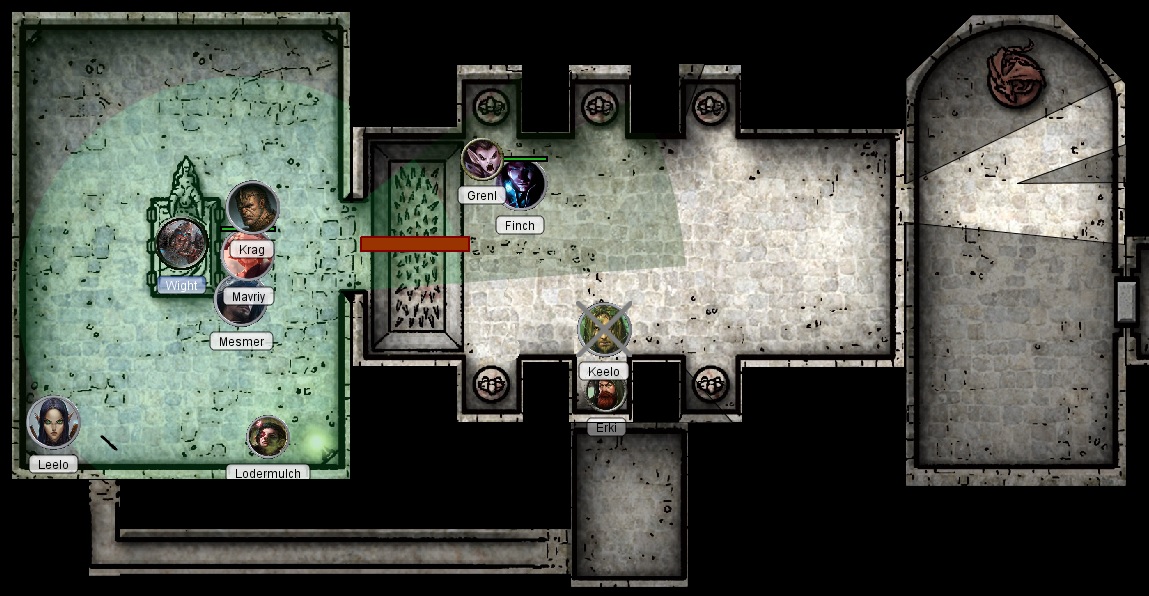 All but Mesmer, Leelo and Keelo are overcome by terror and flee. Even the brave halfling dives for the secret trapdoor and hides quaking beneath. Krag and Mavriy nearly trip each other into the spiked pit as they flee across the creaking footbridge. Leelo sees the dark wight fix Mesmer with pinpoints of glittering light, “Mortal wizard, do not interfere with my passage and you shall be rewarded!” Mesmer stands aside, not daring to oppose the wight since most of his companions lie curled in fetal positions wherever they could find a dark corner. With that, the remnant of the great archmage strides forth across the conveniently-laid footbridge, leaving a trail of swirling darkness in its wake.

The hideous being pauses briefly to turn its lambent gaze upon the uncowed Keelo. A low ironic chuckle issues from Asmoday-wight. ”Thank you for your service, priest.” Leelo cautiously trails the apparition, eliciting a hiss of vexation. “Trouble me not, alfar!” Leelo continues to shadow the wight until it ambushes her at the dragon-door beyond the room of blue-spheres. She dances back just in time to avoid the dark grasp and sweeping stroke of a bronze sword.

Asmoday is subsequently allowed to exit the ruin without further inconvenience. What destination might this foul wight have in mind? More to the point, what new horror have these tomb-raiders unleashed upon creation?

Within Asmoday’s tomb, or prison, lie scattered copper coins and worthless trinkets. A last parting insult from his fellows? Perhaps research at a great library or institution of learning could reveal more about what went on here. 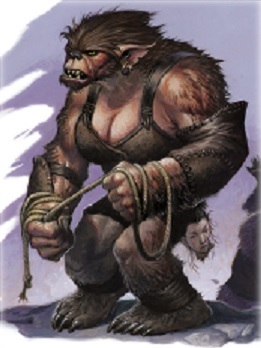 The rune-cursed take a breather and recover their wits, then head back down into the domain of Belak. Grenl guides the party through a series of galleries festooned with fungus and twisted surface vegetation cultivated by the mysterious druid. Finally they happen upon the rumored female bugbear, “Ergza”, only slightly less offensive than her mate. Finch is magically disguised as the late Ballsack and attempts casual conversation. Unfortunately Ergza is not responsive to Finch’s advances, though she is unaware of Ballsack’s demise. It seems she is (was) estranged from her hunk of bugbear man-love. The formidable bugbearess swings her bronze glaive with violent intent, all the while streaming a spate of invective sufficient to curl the ears of an ogre. Finch beats a hasty retreat.

When Ergza bursts through the door, the warlock is ready with a charm spell. Once again all is well in the house of Ballsack and Ergza. Finch pleads lassitude and declines the incipient nuptials with surprising fervor. Ergza is left to her own devices, but as the recently-dead bard might have quipped, “hell hath no fury like a she-bugbear scorned!”

Not long after, Leelo and Lodermulch discover a bronze-bound stone door, much like the others found throughout this area of the ruins, but this time fitted with a heavy lock of bronze. Naturally the door is locked. Another similar but unlocked door gives access to a partially-collapsed chamber. One wall is broken open to reveal the end of a vast cavern lit by luminescent fungus. The cave hosts a ‘twilight grove’ crowded with sickly briars, bushes, saplings and other woody plants normally foreign to a subterranean realm. Low remains of ruined walls and collapsed tower shells protrude from the briars at various points. In the distance can be seen the twisted limbs of a dead tree reaching like clawed hands toward the lofty ceiling. The eerie grove is silent and still as death.

Another locked stone door stands in a fieldstone wall opposite the cavern. Leelo and Loder cooperate to defeat the ancient mechanism. Beyond are the private chambers of a herbalist or druid, undoubtedly Belak. Shelves are crowded with scrolls, dried herbs, wood bottles, powders, pastes, shrunken heads and every other kind of smelly oddment. While the others keep a watch outside, Finch, Mesmer and Keelo quickly search the place.

A folio of notes, cycles, charts and observations of the countryside around Nininsnal is found, of the type a druid would record for the benefit of farmers and others living on the land. The records go back 12 years, but end suddenly about two years ago. It seems that until recently, ‘Belak’ was shepherding a flock and caring for nature as would be typical of any druid in the wilds around a frontier settlement.

A valuable book of great age titled ‘Druidic Theories on the Cycle of Life and Death’ is found lying open on a wooden table. A second folio titled ‘Tome of the Fire Lords’, this one bound in exotic red-scaled hide, is packed away for later examination. These heavy tomes should fetch good prices in a city if they can be hauled out of the jungle. A heavy box contains several hundred gold coins and a few minor gems. Tucked away among the mundane scrolls are two inscribed with useful druidic spells: Entangle and Protection from Poison.

Beyond lies the twilight grove of Belak, presumably absorbed in the study of his ‘Gulthias Tree’.

Session 8: Belak and the Tree

Session 6: The Passing of Ulfmar