Reared from an egg by Elohim monks in a hidden monastery

In the early spring of 325AR, Master Cosmas came down from the mountains above Evermore, riding the Seventh Wind as was his custom. His diamond soul flickered between the frosted cypresses ringing the Pool of Tears. Long ago the angels of Sirona gathered here to heal the pain of the world: their tears of failure formed the Pool. A few centuries later the first Order of Elohim monks arrived in elven lands to establish a covert vigil near the sacred site. The Summer and Winter Courts of the elves tolerated the monks, who were usually out of sight and thus out of mind.

The old monk rode down the wind into the cool, dim sanctum of the Guardian Monastery. The master’s strong frame and taut muscles belied his age: white hair and beard flowed like a waterfall under his gray hood. From his pouch he took a strange rust-red egg the size of two fists and set it gently in a nest of goose-down near the hearth. For days the master kept vigil until the egg cracked and a tiny reptilian humanoid emerged. This was a child of the kobold tribes lairing high in the eastern mountains not far from Acheron’s domain. The kobolds were creations of ancient dragon-cults in the Age of Magic and usually considered pests, but the monastery sometimes found a need for ‘unusual’ brothers and sisters.

Hoxton spent many years at the monastery learning all the monks could teach. He had a quirky nature that often got him into trouble, yet also endeared him to certain fey elves of the forests around the Pool. The elves knew the little lizard-creature was a ward of the mysterious and seldom-seen Elohim monks, so they had no fear of Hoxton and his whims were often in accord with their own antics. Over the years Hoxton drifted away from the monastery and finally took up the profession of carpenter and woodcarver, or ‘woodshaper’ as the elves would say. During this period Hoxton learned his love of food and invigorating drink. In fact he eventually became a legendary braumeister and cook among the elves. But Hoxton would always feel that woodshaping was his true calling.

With the arrival of the intolerant Prince Amelanchier and troubled times in general, Hoxton found himself ever less welcome among the elves. Bitter and lonely, Hoxton returned to his first home. The now-ancient Master Cosmas took Hoxton back into the monastery as if his thirty year absence was but a 30 second trip to the outhouse. Hoxton’s training resumed in earnest. Though Cosmas’ love had always been unconditional, Hoxton knew he wasn’t here by accident. The monks were grooming him for some specific purpose. When his ki was strong, Hoxton set forth on the mission given to him. He owed at least that much to the man who brought his egg down from the mountains 65 years ago.

For millennia the Order of Elohim waged a bitter struggle with their arch-nemesis: Os-Gabella and her unholy children. Alexis and Flauros somehow escaped destruction during the Age of Ice and re-established the vampiric Calabim empire in the Age of Rebirth. As a creation of the Age of Magic with no ties to humanity, Hoxton was immune to vampirism and feasting. The Calabim aristocracy placed a high value on such servants for this very reason: they seldom fell victim to the rogue vampires infesting the crypts of Prespur or roaming the outlying provinces.

A position as ship’s carpenter was arranged for Hoxton aboard the Lanun galleon Artigo bound for Innsmouth. There the Artigo would take on cargo bound for the Calabim port of Nubia. Three weeks into the voyage a winter storm drove the broken ship far off course into the grip of the great southern current. Hoxton clung to wreckage for two days before washing up onto the shore of a mysterious island… 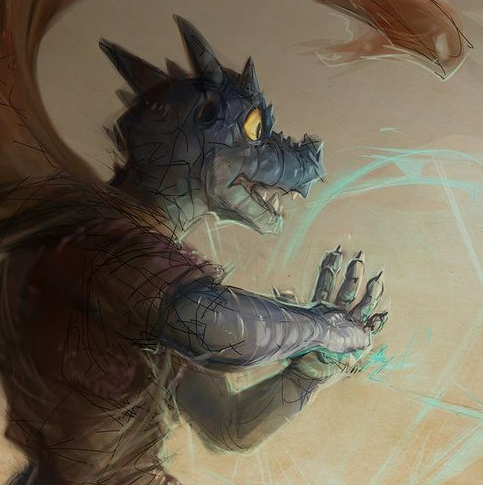