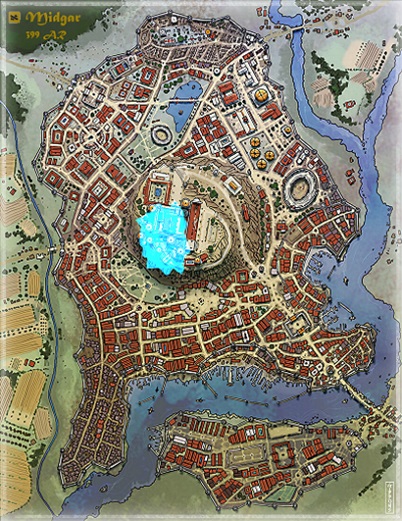 The circle of stars said to foretell Auric’s ascension to the Avatar of Winter sink ever-closer toward the polar horizon. How much time yet remains to intervene? Judging from the motion of this new constellation in recent months, no more than a season. As the Rune Heroes consider the import of this sign, news of momentous events arrive through messengers mundane and magical.

By some subterfuge the vampiric armies of the Calabim have thrown back and utterly defeated Basium’s expeditionary army holding the eastern pass between Grigoria and Calabimia. The Mercurians isolated in Myrea are soon annihilated and the city returned to Calabim hands. Remnants of the angelic host and their allies stream across the Grigorian highlands in disarray. The Grigori city of Edge lies only a few days north of the pass.

Far more concerning is the movement of general Losha Valas’ Grand Army from San’ta’ron to Grigoria’s southern frontier. The desert outpost of Junon falls quickly and soon hosts a vampiric army of astounding proportions. It appears the long-feared Calabim hammer is dropping.

Hoxton and Chrysanthe spent most of the last five years working against the bloodthirsty empire of Queen Alexis and her brother King Flauros. They are able to relate many details about the army of General Valas. Vampire lords enveloped in magical shadow command legions of lesser vampire spawn, half-human moroi caste-warriors, hordes of ghouls and human slave-soldiers. Even worse are the brujah, barbaric vampire warrior-chiefs fueled with blood-rage. The intent is made clear by uncounted siege engines trundling slowly across the desert. Two old associates of the Rune Heroes, Tloques Popolocas and Lady Avurnix of Nubia, accompany the army of conquest.

Before the Rune Heroes can effect a response to this new threat, Cassiel’s major-domo Toric arrives with news of disaster at Midgar. The palace of Cassiel, fallen archangel of Dagda, is entombed in a mountain of magical ice that appeared after a mass of freezing fog enveloped the capitol. There is no word from Cassiel himself, though Toric was outside the palace when the ice arrived and thus escaped the fate of his lord. Toric begs the Rune Heroes to intercede and discover what has befallen Cassiel.

Captain Dorn sails the Witches Brew upriver with Krag, crew, henchmen and allies aboard. Leelo, Mesmer and Hoxton ride their dragons: Draghar, Makugan and Chrysanthe. The remaining might and magic of Grigoria has been thrown southward to stem the expected Calabim advance from Junon, leaving the capitol undefended and in a state of panic. Order is quickly restored with the arrival of the Rune Heroes and their entourage.

The capitol is wrapped in frigid sub-zero temperatures yet without snow or ice save for a huge crystalline glacier dominating the city center. Cassiels palace is completely entombed, while the nearby senate house and hall of state largely escaped the ice. The frozen mountain has thus far resisted the attacks of picks, bonfires and even magic fire conjured by the few apprentices and sages remaining in the capitol. The outline of the palace and it’s south-facing portico can be seem dimly within the blue-white depths, but Cassiel’s throne is hidden. So quick was the ice that the last actions of guards, servants and officials close by the edge are immortalized in the frozen gloom.

The Rune Heroes set to work. Krag shatters a pick against the ice. The glacier is proof even against the holy radiance of Krag’s new faith. Hoxton’s Ki-powered blows inflict only small scratches. The monk risks donning the Eye of Barbatos. The unnatural ice persists even into the spirit-realm, so no access will be possible from that direction. Mesmer decides not to risk magical transference into the unknown gloom. The wizard strides forth to blast the glacier with a fireball. When the steam clears the ice yet stands. Leelo directs the dragons to pour fire and lightning into the ice, but the ice reappears faster than it can be melted. She is forced to tumble away as Draghar’s first bolt is reflected. Now a chilly blue fog seeps from wherever the ice was attacked. Xar follows the fog and soon returns to report the fog flows into the river without breaking up. Citizens flee the streets as the numbing clouds creep down to the docks.

In the growing twilight a sage arrives from the Catacomb Libralis with robes flapping. “My lords, I have observed your efforts and consulted with my peers. We believe the ice is Mulcarn’s doing and therefore can only be defeated by an equivalent power, such as another god, the avatar of a god, or a titan from the Age of Dragons.” Stars and moon illuminate an eerie scene: increasing quantities of icy fog flow down from the glacier and through the streets toward the riverfront. Now cries of terror echo from below. Eldritch shapes move through the fog. Oddly, crackling fires appear within the miasma. Dragons and henchmen spread out through the city to rescue citizens and put out the fires. The Rune Heroes plunge down the hill to confront whatever lurks within the fog. 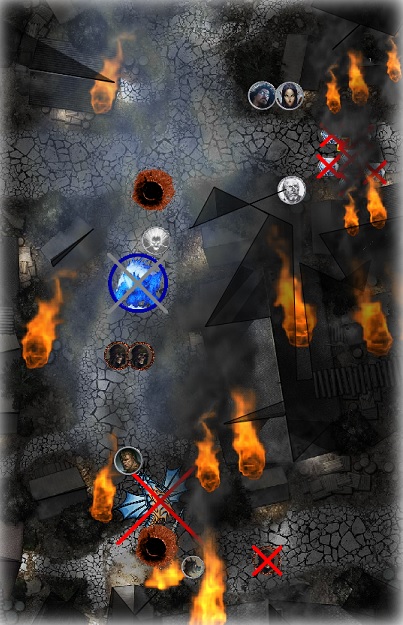 Hoxton spots a strange creature before it burrows beneath the cobblestones: a wyrm-like monster about the size of a horse. The scurrying horror has a score of legs, wings and a long spine glowing like hot iron. Some surrounding houses have already caught fire. Soon enough the creature is identified as one of the nive, servants of Mulcarn’s hell not seen in Creation since the Age of Ice.

Dorn and Hoxton begin rescuing people from the nearby houses. Hoxton is able to follow the nive’s progress for a brief period using the Eye of Barbatos and by means of tremors in the earth. Leelo and Mesmer race forward to bypass an oncoming fog-bank. They run into a gaggle of frostlings which Mesmer dispatches with a fireball. Unfortunately the nearby buildings are set ablaze. Feeble cries are heard from women and children trapped within. More work for Hoxton and Dorn!

The Nive erupts from beneath the street just behind Krag who is separated from his companions by a drift of freezing fog. Krag’s new Guardian of Faith, now in the form of a fiery seraphim, strikes the Nive with a radiant sword, while he summons a half-dozen glowing balls of holy fire that wait to be dispatched to their targets as needed. The fire-cleric’s trio of skeleton warriors set upon the Nive with rusty bronze swords. How will his new deity, Brigit the Shining, feel about her prophet enslaving souls from the spirit-realm to animate undead skeletons?

The building next to Krag explodes as a huge ice elemental charges through. The elemental, deterred by Krag’s sanctuary spell, turns toward Leelo and Mesmer. The wizard grips the charging behemoth in a massive fist of arcane force, holding it in place and slowly crushing it. Leelo avoids entering the fog and instead fires a precious Patrian fire arrow from her magic bow. These prove highly effective against the ice elemental.

Dorn appears from a burning building covered in soot with a wailing child tucked under each arm. After handing off the children to their thankful mother, he begins firing accurate crossbow bolts into the trapped elemental. But the strain of the current crisis triggers a latent insanity inflicted by his handling of arcane ‘star metal’ recovered during adventures five years past. These metal fragments are splinters of a fiery star that fell from a gap in the heavens said to be where the First Horseman of the Apocalypse, Stephanos, entered Creation. Where Mesmer stands, the addled sea-captain sees one of the star-beings haunting his nightmares. He draws his saber and charges, but the Amurite is quicker and polymorphs Dorn into a turtle. Looking deep into the turtle’s eyes, Mesmer confirms the rage is dispelled. Dorn’s humanity is restored forthwith.

Meanwhile Krag and Hoxton combine forces to destroy the nive wyrmling. Here Hoxton discovers striking the Nive with his fists results in explosions of flame that singe him from head to toe. Leelo, Mesmer and Dorn finish off the ice elemental in short order. Leelo sees a break in the fog and sprints through with her companions close behind. No one wants to find out what happens to mortal flesh inside those banks of swirling mist. The ground rocks as a behemoth Nive erupts from the street in a column of bricks, fire and steam. The head of this hissing horror is larger than the entire nive wyrmling. 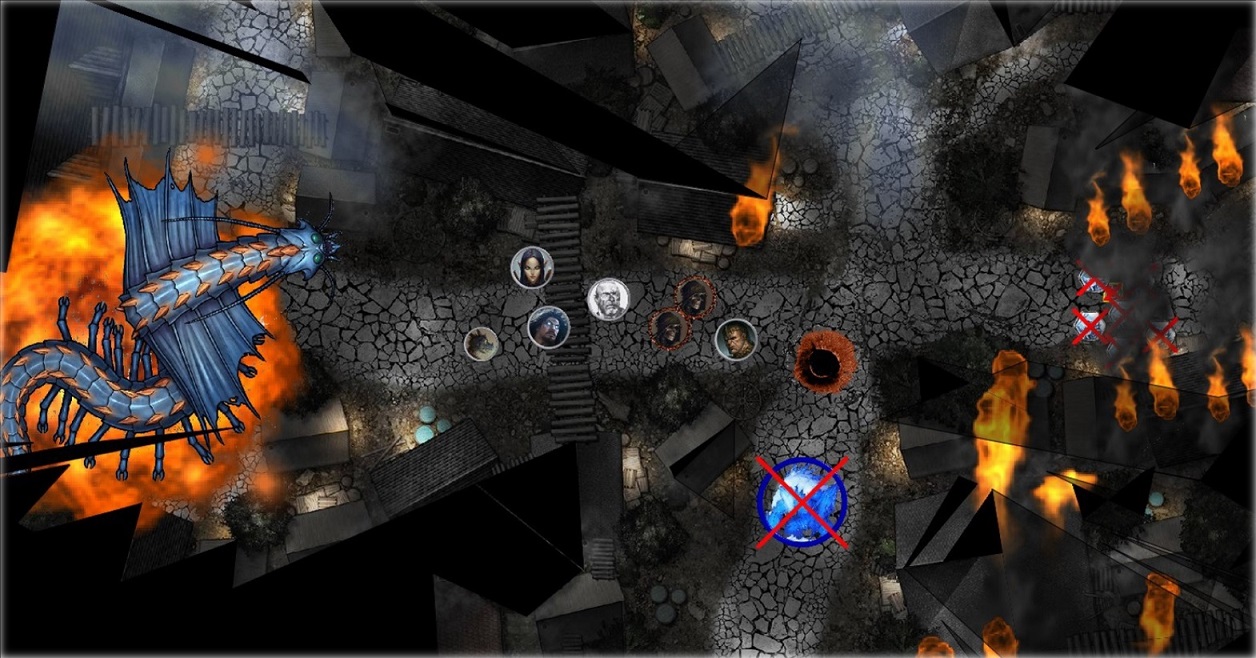