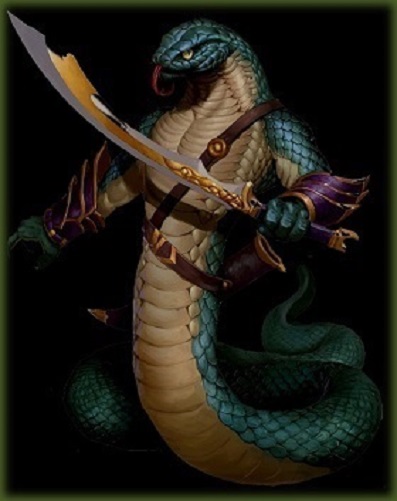 The first day out of Kaldoros brings the Witches Brew alongside the Dashar river estuary. The squat towers of Dashar City rise from the shoreline five miles upriver. Twenty leagues beyond Dashar the Pristinus mountains reach down to bar the coastal land route between Grigoria’s western and eastern provinces. Forty miles of high cliffs and crashing surf pass astern off the port bow.

A great tower appears over the horizon the next morning. This tower is controlled by the Templars of the Sea, a powerful mage guild with hundreds of members across the Lanun, Grigori and Hippus empires. Such fortifications are established to guard precious sources of magical mana employed by adepts, mages, and arch-mages of the various arcane guilds. There are twenty-one types of mana known to arcane spell-casters since the Age of Magic. Each type is associated with three tiers of powerful ‘world ritual’ spells requiring days to cast but affecting thousands of individuals across hundreds of square miles. 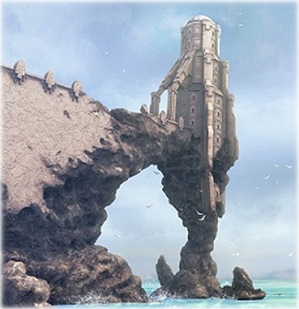 This particular tower supplies ‘air mana’, enabling senior guild members to cast the related world-rituals. For example, the first tier world-ritual for air mana is ‘fair winds’. This spell requires a full day to cast and provides controls wind direction and speed over a wide area for a period of days, allowing the caster to speed their ship on its way. More powerful second-tier world-rituals are available only to mages (13-16th level arcane casters) and require two days to cast. The third tier requires a mighty arch-mage (17-20th level) to spend three full days sequestered among his or her books, assisted by a retinue of servants, guards and apprentices. 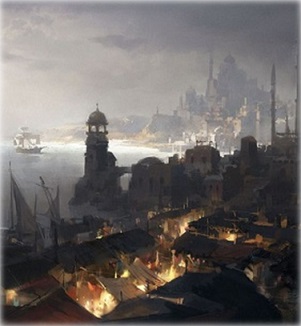 The terraced hills of silk plantations rise from the foothills on the eastern side of the mountains: one of many prized resources extracted from the wild hills, jungles and swamps of the Candaba peninsula. After another day and a night, the Witches Brew puts into port at the city of Kalocy. Like other major settlements on the peninsula, Kalocy is a former barbarian city, in this case conquered by the Grigori forty years ago. A large proportion of the population is descended from the indigenous humanoids and humans. Perhaps fifteen percent of the population consists of green-skinned goblins, orcs, and half-orcs. Also present are black-and-purple-scaled kobolds unique to the region. Semi-civilized lizardfolk tribes inhabit the swamps around the periphery of the city.

Here the Rune Heroes meet Dariel, the local contact arranged by Toric. The next day Dariel leads the way northwest along an elevated road through rich fields of rice, a major staple in the province. Xar the ice gnome ranger and Grenl the goblin shamaness accompany the expedition. Jank and Thothra remain in Kalocy with the crew of the Witches Brew.

After a day’s ride on borrowed horses the party arrives at the settlement of Ulmira. The rough-and-ready population of two thousand make their living by trapping and hunting the productive swamps and jungles. The major structures of the town are built upon elevated platforms constructed of the plentiful swamp-tree hardwood. The town is surrounded by forty miles of swamps and saltmarshes. Dense jungle stretches north into the unknown. A coastal road leads west to the silk plantations of the western highlands. 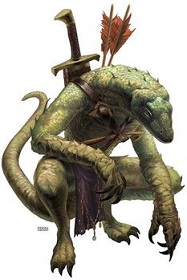 Toric’s agent Dariel introduces the Rune Heroes to a scarred lizardman barbarian: Thogma. At first he is only a pair of fist-sized eyeballs protruding above the water. The lizardfolk of Ulmira appear to make their home in the waters around and below the elevated wooden streets. The dripping saurian emerges and shambles forward. Even hunched over this barbarian is almost seven feet tall. “For one hundred gold I take outlanders to the city of my abominable ancestors.”

Before departing, a nervous Dariel explains that the city of Thogma’s ancestors is a ruin located perhaps eight days march through jungles and swamps. Rumor says the lost shrine of Lingnang can be found there. Mesmer and Hoxton try to get more information from the inscrutable lizardman, but his unblinking stare is proof against their efforts. At least Thogma doesn’t seem to be lying outright, if judged by normal standards.

Mavriy rides back to Kalocy and retrieves her wyvern from the Witches Brew. The wyvern consumes the bloated corpse of a manatee-like creature floating in the swamp. Upon returning to Ulmira, Mavriy chains her fearsome mount inside a stand of giant cypress outside the town.

The oddly-pigmented kobolds unique to the peninsula are more common in Ulmira. Perhaps one quarter of the population consists of the small spined greenish-black or purple-black humanoids. Many are menial laborers or domestic servants, but a minority have achieved economic success and social status as successful traders and shopkeepers. 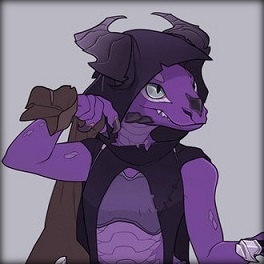 Hoxton notices a particularly toothsome purple-scaled damsel peeking at him from an outdoor table. A sign depicting three giant cedars hangs above the door: the Three Cedars inn. Her kobold girlfriends titter and hiss when caught ogling the strange rust-red kobold outlander. After Hoxton’s bungled attempt to introduce himself, Mesmer takes pity and comes to the rescue. Soon names are exchanged. The purple damsel is Serlatha, daughter of a successful bait-shop owner. Somehow she gets the idea Mesmer is Hoxton’s guide or servant, a misconception which significantly improves his standing! Mesmer takes this in stride and plays the part.

Serlatha turns out to be well-versed in local lore, much of it dubious or shrouded in myth. She knows the lizardman barbarian Thogma to be trustworthy, at least if well paid and fed. “Very few” outlanders have ever disappeared under his care. As for the Ruins of Thogor, Serlatha shudders: “The lizardfolk tried to build a great city long time ago, but were punished by the gods. They failed to pay proper respect to the great all-father black dragon. Now only their demented ancestors live among the ruins. Oh don’t go, you’ll surely be eaten by the god-dragon or turned into a newt by the abominations!”

The Rune Heroes meet Thogma at the outskirts of Ulmira the next morning. Krag brings along a half-dozen live chickens. Spotting huge glassy eyes and Thogma’s scarred face, Krag begins tossing chickens. The barbaric lizardman puts on a fine show by leaping from the water to pluck fluttering fowl from the air. 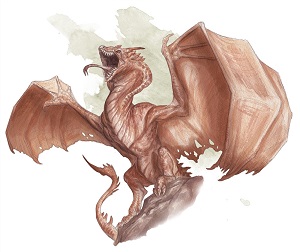 Mavriy retrieves her wyvern and flies high above the Rune Heroes as they trudge through the wilderness far below. Hoxton occasionally rides with Mavriy to lend an extra pair of eyes. Mavriy makes wide loops above the jungle, pressing the wyvern to fly farther each day. She spots the headwaters of a river and the crumbling remains of ruined city to the north. Here is proof that Thogma seems to be guiding the Rune Heroes in the right direction.

On the fourth day Mavriy hazards a longer flight. She follows the meandering river east then south until sighting inhabited pastures northeast of Kalocy. Perhaps the wyvern spots or smells livestock, for it suddenly breaks free of Mavriy’s control and turns toward Kalocy. The stinging tail can easily reach a rider. Fortunately, the wyvern doesn’t attack. Only after twenty minutes is the demonling paladin able to regain control of the ferocious beast. In the failing light Mavriy spots two dark saurians flying far to the northwest. Wild wyverns or something else?

With the aid of Thogma’s guidance and Mavriy’s aerial observation, the trip to Thogor requires only one week. Thogma knows how to avoid various obstacles and numerous deadly flora and fauna. The barbarian disappears shortly after the party reaches the edge of the ruins. Apparently his services don’t include a return trip. Or perhaps the lizardman watches from the river or jungle. It’s unlikely even Xar could find Thogma if he didn’t want to be found. Mavriy feeds her wyvern a huge blubbery quadruped found wading in the river. She chains the torpid beast in a shallow cave near the riverside. 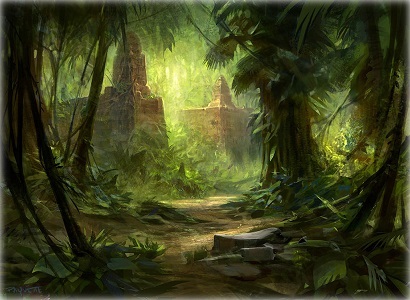 The tumbled stone monoliths and crumbling step pyramids of Thogor appear as the sun sinks below the jungle canopy. In deep green twilight the Rune Heroes approach a clearing strewn with low hexagonal pillars jutting from the earth at varying heights. A well in the center of the stones swirls with phosphorescent green water. The pool seems to have no source of water, yet perpetually drains into some unknown space.

Hoxton and Leelo creep forward. Mesmer can’t resist the mystery of the magic fountain and follows close behind. Green serpent-eyes glow from the tangled canopy above. A wave of supernatural terror sweeps over the intruders. Alien voices whisper wordlessly into Leelo’s mind, suggesting that safety lies within the pool. The fleet-footed elf darts off and dives into the churning well before anyone can stop her.

Leelo is spat out of the whirlpool into an underground chamber dimly lit by hanging strands of glow-worms and blue-green lichens. The chamber is filled with waist-deep water rising to the steps of a wedge-shaped stone temple. Pulses of faint violet, red and white light glow from the unseen roof.

The magic of the aifon torc transforms Leelo into a sleek mermaid. She slips silently through the dark water, surveying the subterranean structure from every side. The only means of access from the ground level appears to be a single stone door in a narrow alcove above the steps.

Something with arms and a long snakelike body plunges into the lake from the well high above. Leelo stalks the creature beneath the shallow water. It swims to the temple and crawls sinuously up the steps. Emerging and peeking around the corner, Leelo comes face-to-face with one of the snake-man abominations spoken of by Thogma and Serlatha, among others. The creature is ready and waiting but the speedy elf is faster. She makes short work of the snake-thing, then turns to inspect the stone doors.

Meanwhile in the ruins above, reptilian abominations assault the Rune Heroes from all sides. The first drops from the jungle directly onto Hoxton. he evades the grip of powerful coils, but the snake-monster sinks poisonous fangs into his shoulder. More snake-demons emerge from the jungle wielding bronze scimitars green with age. Antiques from the heyday of Thogor? 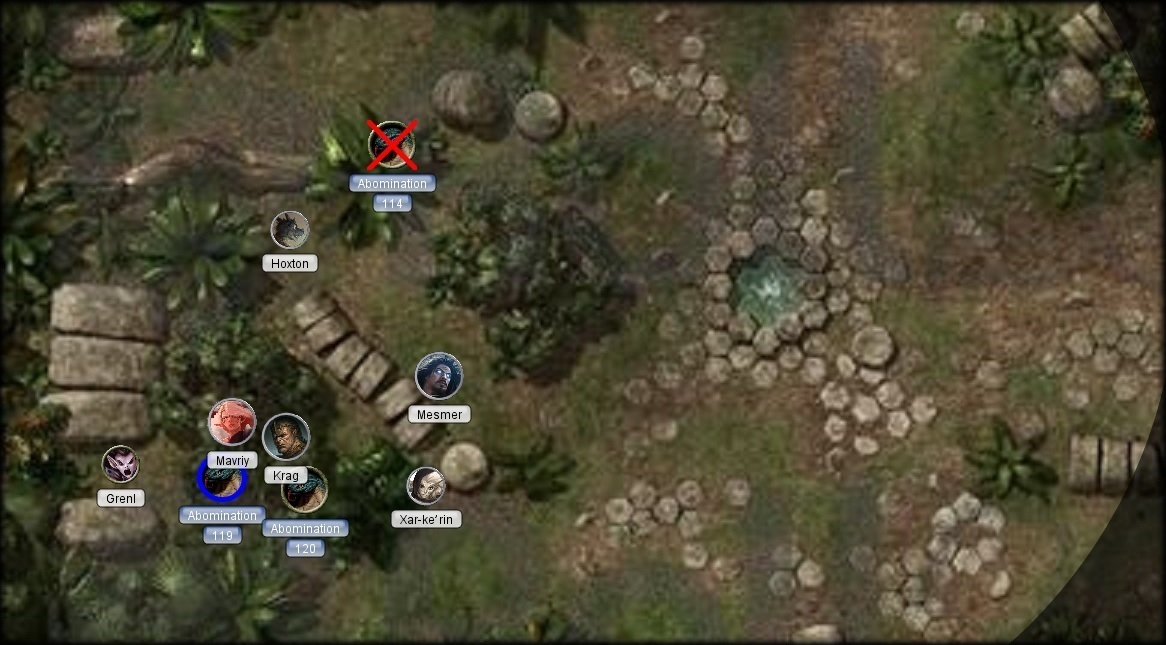 Mavriy and Grenl take on two of the creatures approaching from the right. Krag wards the party from the terror of their assault: all stand their ground and resist telepathic suggestions to jump into the pool or flee through the darkening jungle. After a short frantic struggle, all three abominations are destroyed.

What of Leelo? She does not respond to Mesmer’s magical message, but this spell has only a short range. Krag preserves his more powerful spirit-realm sending spells in case he needs to heal or protect someone instead. Mesmer and Krag drop a rope into the magic pool and lower Mavriy. Despite Mesmer and Krag’s best effort the rope is jerked free by the powerful current and Mavriy plunges out of sight. A second rope is tied off to one of the hexagonal dolmens and lowered into the pool. Leelo and Mavriy use this rope to escape the cavern.

The explorers retire a short distance northeast and set up camp beneath Mesmer’s dome of protective magic. Krag applies healing magic while the explorers take their rest. The pitch-black jungle is strangely silent but for the glowing pool burbling softly among the ruins. 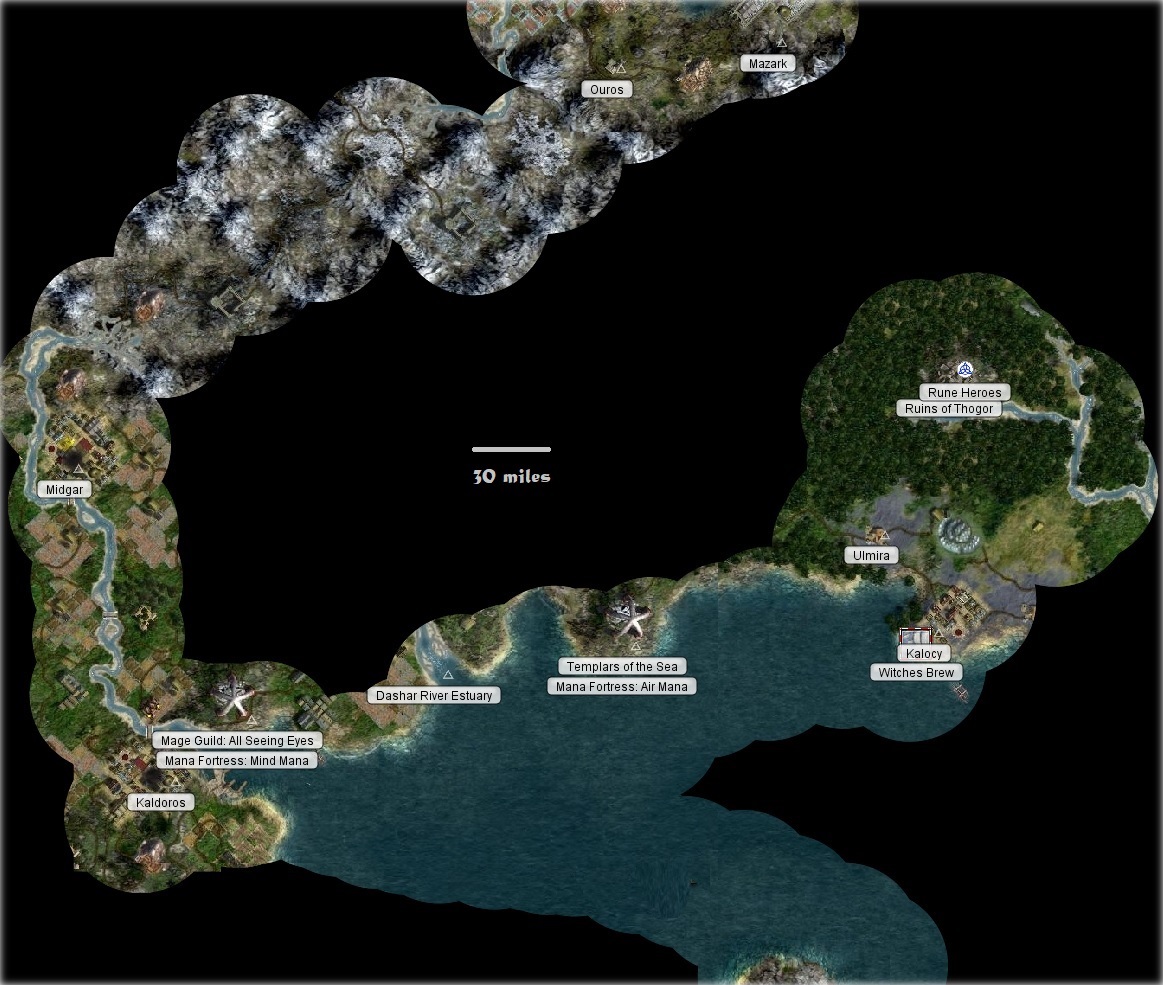 Session 47: The Temple of Khunar

Session 46: Heroes of the Khazad