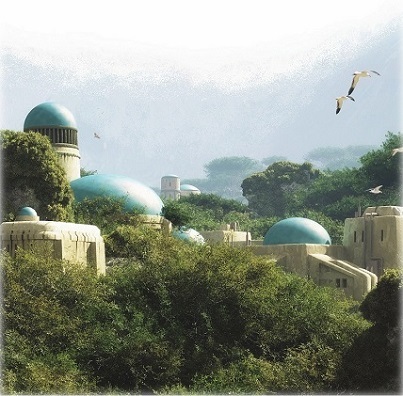 The rune-cursed refugees from Fort Scylia are lost amid the vast Earthsea where the small coastal galley was never meant to venture. By the second day the mast and sail are repaired, but no one aboard is skilled at sailing or navigation. On the fifth day a storm blows up, capsizing the vessel which fortunately continues to float. The foundering ship is soon blown up on the rocks of an unknown shore. A narrow strip of white sand beach is backed by dense jungle. In the far distance a watchtower rises from a jungle along the coast.

After salvaging gear and equipment scattered along the shore, the adventurers head north toward the watchtower, passing a few small fishing villages carved out of the jungle. From the inhabitants Leelo and Mesmer learn that the settlement to the north is Nininsnal, a frontier city on the southern fringe of the Sheaim empire. Lodermulch trades a few bronze spears for local salted-fish, bread and fresh water. Three coastal cogs are anchored offshore. Ulfmar identifies Calabim, Illian and Svartalfar flags in the makeshift harbor.

Guards atop the watchtower stare down in wonder at the approaching gaggle of ship-wreck survivors. There is no toll at this gate. Nothing lies south of the city except a few fishing villages and the vast jungle wilderness. This is Nininsnal, population ~4000, originally a far-flung colony established by monks from the Elohim Empire 45 years ago. In the year 368 the colony was conquered by the Sheaim after a short war with the Elohim but retains some aspects of Elohim culture such as language, architecture and religion. It is truly a rough and tumble frontier town with all types of visitors from far lands coming to seek their fortune in the ivory or fishing trade and other more adventurous enterprises. Even stranger creatures are known to frequent the muddy streets, shadowy alleys, shabby inns and alehouses, including devil-spawn, cambions, githyanki and in the last few years, fiendish visitors from the newly established infernal empire far to the east.

Nininsnal hosts many establishments catering to hunters, adventurers and prospectors exploring the jungles to east and south. The sigil-heroes sell or trade much of the salvaged equipment and weapons in exchange for new gear, food and lodging. Steel weapons and armor are rare and expensive, most often made from strangely lustrous iron imported from Infernal lands. Keelo uses a detect magic spell to discover the green pearl and contents of the two bottles are magical. Tasting reveals the potions to be healing and heroism. The antique silver sword is mundane, though still quite valuable. Leelo mentions she might be open to a trade with Mesmer, but the wizard bides his time. “Patience now! I’ll get my sword back when the elf meets her end. Probably sooner rather than later.”

Leelo notices the magic pearl is now dull, more like a typical if unusually pigmented pearl, where it was positively glowing during the escape from Scylia. When she tries to sell the pearl, the dealer offers surprisingly little for so fair a gem. Leelo soon discovers she is unable to bear the thought of parting with the pearl at any price! The alfar hides the gem away, taking it out only when she is alone. “What marvelous colors! Surely you are my good luck charm…”

A day of wandering around Nininsnal provides more details about the situation. This frontier city is far from the Sheaim administrative capitol in Galveholm, where the Grand Archmage Tebryn Arbandi rules with a mostly even hand, interspersed with bouts of terror when Os-Gabella goes on a binge. Slavery is a pillar of the Sheaim economy. Most live in miserable conditions, though skilled gnomes captured during the brushfire-wars with the Luchuirp often gain privileged positions as high-caste engineers, tinkers and mechanics. But they are still slaves. The empire is represented by a governing Marquess and garrisons of archers, slaves and animated skeleton warriors shepherded by necromancers and lesser acolytes of the Veil. The Marquess and her retainers mostly keep to the fortified compound at the center of town. She seldom interferes in local affairs other to collect taxes and undertake various civil engineering projects such as a nearly completed log palisade enclosing the town and the beginnings of a breakwater and jetty to protect a future harbor.

Tensions between the local population and the Sheaim Marquess are high since the Ashen Veil is unpopular here. Krag discovers that most of the citizens still practice worship of The Order as preached by the original Elohim priests decades ago. Worship of Nantosuelta, goddess of faith and war, is still quite popular. Yet there are no major temples to any of the gods or religions, only small shrines and private worship.

Ten days prior, the warlock Finch arrived in Nininsnal disguised as a Sheaim merchant prince from the far north, with appropriate carriage, driver and footman retained to look the part (at 10 silvers per day). The factitious merchant is covertly approached on the fifth day by the agent of an unspecified ‘local merchant lord’ looking to sell a special item, a magical fruit said to be capable of bringing the dead back to life. The asking price is a staggering 10,000 gold! A fully crewed sailing ship could be had for such a fantastic sum. The agent, known only as ‘Todos’, deftly dodges questions about the source of the fruit, but Finch manages to extract the following:

A few days after Finch meets with ‘Todos’, he discovers a group of adventurers sojourning at a dockside inn of poor quality, the Drunken Mermaid:

This group is planning to head north up the ‘Low Road’ toward Kuldevind to investigate reports of bandits, goblins, and a huge sinkhole that recently opened to reveal a buried ruin. The low road is no longer maintained or patrolled since completion of the better-engineered ‘High Road’ several years ago. Finch attempts to insinuate himself into the group, thinking to tag along and see if he can locate the bandit chief and source of Todos’ magical fruit. Finch fails to truly gain their confidence, or perhaps they dislike the idea of splitting treasure five ways. In any case, the group departs silently in the dead of night, leaving Finch twiddling his thumbs at the Drunken Mermaid.

On the third day of their sojourn at Nininsnal, the party spots Finch stepping from his carriage along the main street in front of an expensive private wine-shop. He is a striking young half-elf with raven hair and piercing eyes of electric blue, dressed in the rich purple and gold costume of a Sheaim merchant-prince. Finch is about to meet with Todos for a second and probably final time if he fails to produce a wagonload of gold. A glowing blue rune hovers above his head. Finch and the rune-heroes stare transfixed at one another across the main street. The Warlock thinks fast and uses the gift of his unnamable mentor to message Leelo. “Quickly, into this wine-shop as my guests.” Thinking to gain advantage from these newcomers, Finch relays the essential situation to Leelo, who passes it along to her companions.

Four brawny guards wearing expensive iron chainmail with bronze axes and short swords, lounge in the shop’s antechamber, obviously retained by Todos. Guards were not present at their first meeting. The main party takes seats in the posh common room. Finch proceeds to an adjacent private room where he finds Todos waiting. Leelo and Ulfmar can see the pair through a window between the rooms, though only Ulfmar is close enough to guess the gist of their conversation.

Todos commits a few blunders that reveal he is not an agent, but likely the principle. He’s in more of a hurry than ever. ‘Todos’ admits to selling three of the magical fruits since the summer of 388, all obtained from a bandit going by the name of ‘Sizymondo the Great’. Todos has thus far been unsuccessful in his efforts to learn Sizymondo’s source.

Finch is not able to divine who Todos in turn sells the fruits to (no doubt at a huge profit). With a flourish the false merchant prince presents a forged promissory note against a major bank from the far northeast. To distract Todos from inspecting the note too closely, Ulfmar begins belting out a sea shanty from the common room. In annoyance, Todos quickly accepts Finch’s forgery. The two men agree to meet and finalize their transaction at the guildhall in the keep of the Marquess eight days hence, allowing time for the note to be validated.

Later Finch asks around town about Todos. He soon determines that Todos fits the description of a high-profile merchant lord, Yandroon Kuldevind (of the same name as the city to the northeast). This merchant has been frequenting Nininsnal of late. Why would such a wealthy and connected merchant lord be slumming it in a frontier city where he is most unlikely to find a buyer for such high-priced magic?

Back in the common room Leelo notices a small inconspicuous man in a gray cloak. He employs subtle signs to warn other rogues that he is a high-ranking member of the local assassins guild, the ‘Black Stars’. An undisclosed number of additional operatives are in the area. Leelo later acquaints herself with ‘Draven’ and learns something of the guild, currently a small operation with no fixed premises, mostly engaged in protection and espionage for both Sheaim and foreign merchants. From one of Draven’s operatives Lodermulch discovers contacts in the local thieves guild where he might be able to replace the tools he lost in Scylia. However, money for such luxuries is lacking.

Leelo and Lodermulch follow Yandroon to a comfortable inn Finch knows him to frequent, the Succubus & Incubus. After Yandroon retires to his chamber on the second floor, Leelo scales the alley-side wall. She falls and sprains an ankle, but Krag is on hand with a healing spell. A night-watch consisting of 20 armored skeletons and six guardsmen troop past but fail to notice Krag and Leelo in the alley. On the second try she reaches the open window of an empty chamber. The elf picks the lock on the interior door and enters the hallway. Finch uses his telepathic ability to inform Leelo when guests and staff pass up or down the steps.

Leelo is unable to locate the correct chamber until Lodermulch discovers the name ‘Todos’ scrawled next to a number in the innkeeper’s key drawer. Finch relays this information and Leelo is soon inside Yandroon’s chamber. The merchant-lord is not present. In fact, the chamber seems unused. The heavy window shutter is wide open to the city street below. The only evidence of occupancy are a few crumpled papers in a chamber pot.

The papers record various accounts and personal notes from which Leelo divines Yandroon’s identity and his reason for coming to this distant settlement. It appears Yandroon has grown fearful regarding the purchaser of the first three fruits, who he has come to suspect is the “Queen of Storms.” Finch recalls this is a common sobriquet for the immortal Queen Os-Gabella, arch-terror of the Sheaim Empire and many another. This goes far in explaining Yandroon’s extravagant precautions. When one sups with the devil…

The seven rune-heroes spend a sleepless night in Yandroon’s empty chamber. Mesmer conducts a ritual to summon a magical familiar. The crow sits outside the open window all night, but the merchant never returns by means mundane or magical. Nor does he appear in Nininsnal over the following days. Either he’s away personally validating Mesmer’s note (which of course will be revealed as a forgery well before any meeting at the Marquess’ keep), or has simply fled Nininsnal.

Session 2: Ambush on The Low Road

Session 0: Debacle at Scylia Sailors on the Seas of Fate